Working with Collin I designed a carrier card for the Due that incorporated the CAN translation chips. The carrier card also had optically isolated digital and analog inputs that where interfaced to the Due and contained a 256k EEPROM. The card was electrically hardened to help further protect the Due. The whole design including the code for the GEVCU was setup as an Open Source project.  The files are maintained on Github under Collin's repository. Part of Jack's specification was that the GEVCU needed to be configured via a webpage that could be assessed with any device, i.e. laptop, tablet or phone. The first GEVCU design incorporated a wifi interface chip from a company called ConnectOne that has an embedded web server. The first design of the GEVCU was packaged in an aluminum enclosure that incorporated more electronic hardening and a unit was delivered to Jack Rickard.

Jack had a vehicle (1974 WV Thing) that he setup as a test bed for the GEVCU. This first version of the GEVCU had an Ampseal 23-pin connector that had wires hand soldered to the pcb.

During EVCCON 2013 with the help of Paulo Jorge Pires de Almeida and Celso Menaia from Portugal, the GEVCU was first able to get the WV Thing rolling on the road. At that conference the Thing and the Transit Connect were measured on a dynamometer and the Siemens motor in the Transit Connect produced 144 peak horsepower and the Thing peaked out at 90 hp

The hand soldered wires for the Ampseal 23-pin connector were considered a possible failure point so a new version of the GEVCU was designed and incorporated an Ampseal 35-pin connector directly soldered to the pcb. In this design the Arduino Due is mounted upside down and the bottom base board has the Ampseal connector, the power conditioning circuits and the digital I/O. A intermediate board has the optically isolated analog inputs. 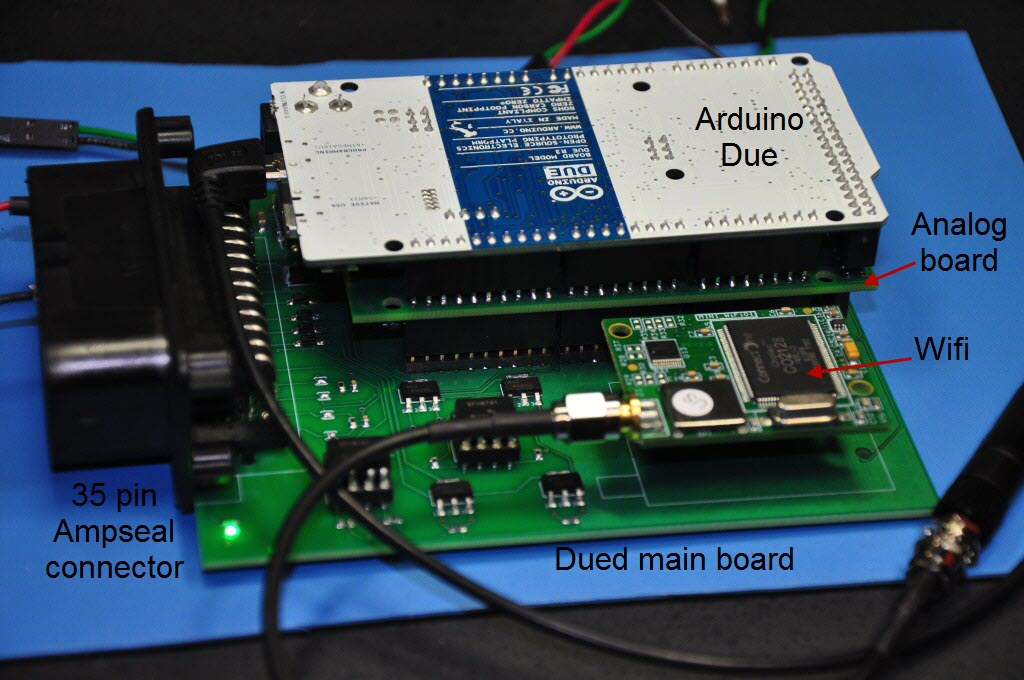 The one issue with the GEVCU design that used the Arduion Due is that it had many pins that connected the interface board to the Arduino Due. With Paulo's input, it was decided to forgo the Arduino Due and mount the ARM chip on a board directly with all the CAN and interface circuitry. To that end we currently are on version 4.2 of the new GEVCU design from Paulo. Photos of the design are the the photogallery. The latest version has eight channels of digital output that is MOSFET driven and can accommodate up to 2A per channel and can be driven PWM. There are four channels of optically isolated analog input. The analog inputs are used to measure the throttle and brake transducer voltage levels. There also are 4 channels of optically isolated digital input. The ConnectOne Wifi chip is also used, but unfortunately we have found out recently that ConnectOne is phasing out that product. Others have joined in the code development for the GEVCU, Charles Gaplin and Michael Neuweiler and Mark Weisheimer has worked on the hardware. Michael developed the first website for the GEVCU interface and Charles further developed it. Michael has also been working to port the GEVCU code over to controlling his Brussa inverter and charger. Recently the group has split off from Jack Rickard and formed a parallel effort for the GEVCU development. See http://gevcu.org/. There also is a Google discussion group for the GEVCU development. https://groups.google.com/forum/#!forum/gevcu-development