Initially the Battery Maintenance System (BMS) will be provided by the Analog Devices DC2260A BMS Demo board which demonstrates the LTC6811-2 BMS integrated circuit.  This circuit has the ability to measure 12 battery cells simultaneously and communicate via either isolated SPI or standard SPI. When using the demo board with the 14-pin ribbon cable standard SPI is used to communicate with the Linduino. If multiple BMS Demo boards are used then the isoSPI interface is used and the Linduino needs a DC2792B shield.  A new circuit based on the DC2260A has been designed and the initial build started.  The D2260A demo boards are somewhat expensive ($150 +S&H) plus the cost of the Linduino ($125) and DC2292B ($75) shields (9 demo boards plus 2 Linduino and 2 DC2292B). Plus an overall controlling circuit needs to be designed to take the data from the Linduinos.  The new design circuit incorporates an Arduino Nano circuit and CAN BUS interface.  The Nano communicates with the LTC6811-2 to read the cell voltages and then sends that data out on the CAN BUS.  A much cheaper implementation and there already is a CAN BUS system in the car the controls the dashboard instruments.  Probably the first 4 battery modules will be used with the DC2260A  BMS demo boards and the other battery modules in the car will be monitored with my circuit design.

The screen picture below shows the Multicell Monitor GUI during the discharge process.  In normal operation in the car, only cells that are at a higher voltage would be discharged. An algorithm will be written to control that process. 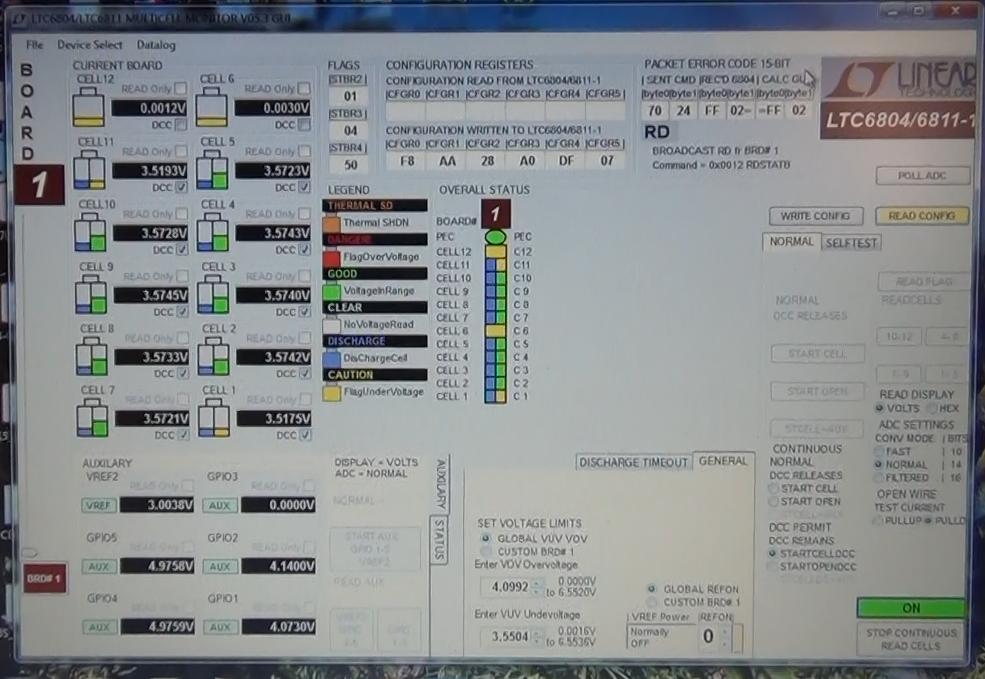 Top side of DC2259A  BMS Demo board showing active discharge channels.  When the MOSFETs are turned on to discharge a battery cell the LEDs light up. Again, 6 and 12 are not lit because they are not connected on the 10 cell battery module. 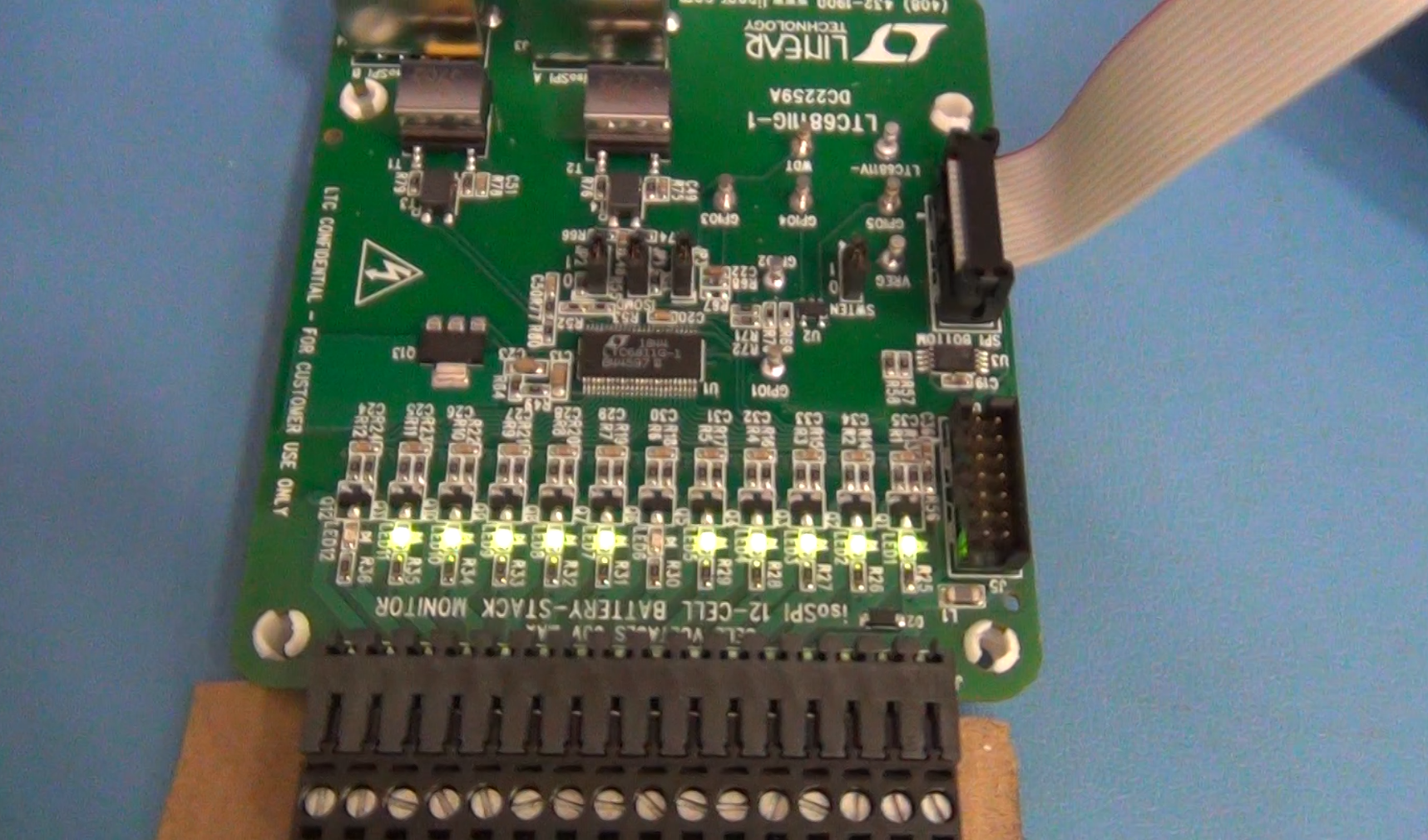 Bottom of DC2259A showing the discharge resistors.  The resistors are 330 ohm so on a battery cell that varies from 3.5V to 4.1V there can only be a little more than 100mA discharge current. On a cell that is 180AH that would take a huge amount of time to fully discharge. This board is not designed for that.  The design is to just trim the cell voltages so they are all the same value.

Image below shows the demonstration of the isolated SPI (isoSPI) that will be used to connect up to 5 BMS demo boards to one Linduino and a DC2792B isoSPI shield.  In the car there will need to be two Linduino/DC2792B controllers for the 9 Bolt Battery modules. With the other BMS demo board shown above, the DC2259A, the board can only connect multiple boards by daisy chain SPI. Not as isolated as the isoSPI but more boards could be connected together.  The iosSPI is limited to 5 boards and requires the addition DC2792B shield.  The daisy chain SPI can connect more boards and does not require the shield. 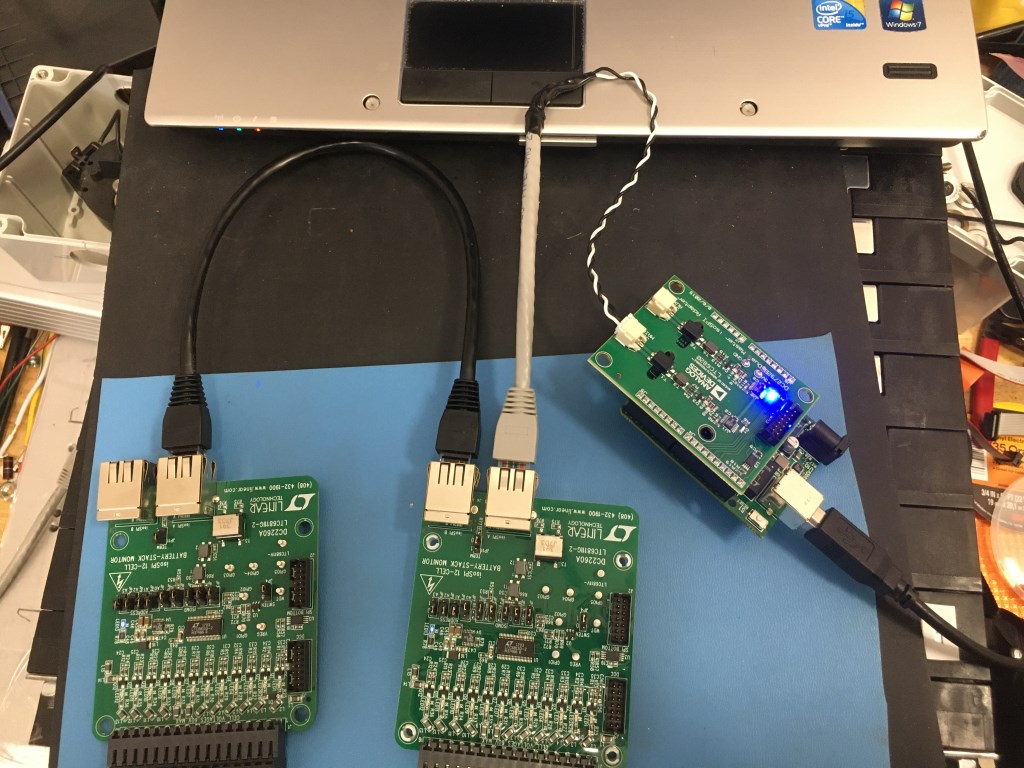